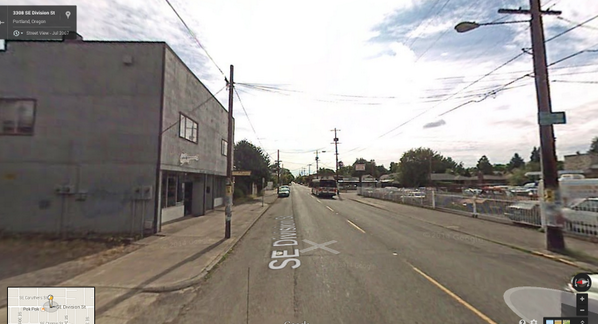 Today I dove into the middle of a conversation on twitter. Twitter, it seems to be the conversation machine of short blurbs and broken context. So this blog entry is actually dedicated to the conversation that started off, at least for me, with this tweet.

That tweet was actually a response to Tony’s @twjpdx23 tweet of “The Mt. Hood Freeway did the whammy on that street and what we’re seeing now is repair, IMO.” which was in reference to Division Street. Which is interesting as Division Street and the entire neighborhood was supposed to be replaced to put in an Interstate from south downtown Portland that then would run out to I-205. I-205 of course is there, the Interstate that was supposed to replace Division Street was stopped. Then thousands of people lived there, and would have their houses taken and been forced to move, and today thousands plus thousands more live on this street in this corridor in one of the most sought after neighborhoods in the metro region.

Division Street however has had declarations that it is gentrifying to the simple hipster moniker of “it’s so over”. It’s important to note how little has actually been lost that was residences on Division, almost all new apartment buildings and retail on the base of those buildings replaced something Tony pointed out with this tweet.

.@urbanophile lets not rewrite history, here's what it looked like in 2007. pic.twitter.com/dPyp8MTxtJ

Division was a pseudo wasteland. Sure some people lived along the street but it contained a lot of junk yards with dead automobiles, lots with empty businesses that had been boarded up and several buildings that were used as really cheap storage for junk. These were buildings that did nothing for the surrounding community. There were also several auto shops that were shuttered, and if I recall a gas station or two that were also shuttered. Arguable, this was all shut down or lost business because of the Mount Hood Interstate threat, but whatever the case, Division was a cost center and not a contributor to the overall city as a whole. That however has already changed very quickly.

In many ways, Division Street has become another Portland street that has the standard popular Portland establishments at retail level amid a number of brand new 3-4 story apartment complexes that line the street. These apartment complexes are all without automobile parking. There have been a number of complaints about these apartments, from their outwardly plain and disgusting appearance to people being horrified that people might move in with cars and park them in the free on street parking. Which the later fear is coming true, they are indeed parking some of their cars in the free, publicly funded, publicly accessible on street parking.

The neighborhood of course feels entitled to their parking, which of course is publicly funded, publicly accessible street space that is allocated by the city for on street parking. No individual owns these parking spaces, they belong to the city and thus the people. Anybody can technically park there and they absolutely have the right to do so.

One of the other twists is that most of the houses that exist in the neighborhood were built when the neighborhood was originally built as a streetcar suburb. Which means the sidewalks, roadways, the now removed tracks, the initial public spaces like parks, sewer, and other items were paid for by that generation of residents and the streetcar companies and developers. Along with that, being they had easy access to a streetcar and little need for purchasing power to buy up a bunch of cars, nobody had garages. So this only adds to the current residents feeling entitled to on street parking. The city of course has exacerbated this feeling and ideal among the citizenry because they took over street maintenance, sidewalk maintenance and other amenities in light of the streetcar systems and developers being – in effect – destroyed generations ago.

The Mount Hood Freeway project and others were stopped by the community with the help of anybody and everybody that would aid them. This was done during a period of mass protests against the destruction of neighborhoods in cities displacing thousands upon thousands of people, drawing lines and segregating people throughout cities and condemning the poorest of the population. Portland was one of the cities that stopped this perverse march forward that the United States was undertaking at the time.

By doing so, just the declaration of an Interstate going in on Division set in motion actions that would snuff out Division for decades to come. Division, after all those years of being devalued, is now being rebuilt. This is how it is turning out, and it is turning out this way from tons of input from citizens over there years. But of course, those not involved are now complaining the loudest, albeit we’re not even sure exactly what the result of these developments will bring us.

So now we have an entitled population that demands all of these services, has no insight to their actual cost and screams loudly that they must have these amenities. Fortunately for Division Street residents they have already made changes and started the process of getting what’s theirs! Because we all know, as Hart Noecker pointed out during the conversation,

@TransitSleuth @bungalowranch @twjpdx23 Pretty sure we can all agree PDC money doesn't go toward equity. Trickle down tax base is a fraud.

Which in large part it’s pretty hard to disagree, if we look at the data, the tax money generally stays or moves in two ways.

This tweet also pointed out how money stays in Cora’s @bungalowranch region via Metro, which alludes to the previously stated observations of tax revenue flow.

@HartNoecker @TransitSleuth @twjpdx23PDC money is the only thing that's ensured the revenue generated in my neighborhood gets spent there.

So in the end, yeah, taxes generally act as a maintainer of classist society the way the United States has them setup – keeping people in their particular stratus in the whole hierarchy of things.

Current tax structure sucks at providing upwards mobility to citizens in the United States. It doesn’t server the poor to lift them up effectively nor does it serve the middle class except to devalue and redirect funds in ways that usually don’t follow back around to actually lifting up the middle class.

Taxes, specifically the way they’re setup in the US and in some part Oregon/Portland are kind of just crappy.

So thus, I digress, it’s an important point in the conversation but back to Division Street and on to Lents…

Division Street has since stopped almost entirely any new apartment buildings being added that will have no parking. They’ve re-added parking minimums increasing the cost of construction for any new buildings. They’ve already started to limit various new projects and the comprehensive plan which would or will allow rezoning of areas is currently being discussed (as I mentioned in a previous entry). Overall we all get to see now how Division will continue to develop and if it will be an example to mimic or learn what not to do in the future.

But that leads me to the next comment that was made that I had to disagree with. Love the Division Street development or not, this one threw me a curve ball, as it seemed to conflate things in ways that happens somewhat frequently.

@twjpdx23 @TransitSleuth It eats up the private development capacity and retail growth gets concentrated rather than dispersed.

Now, being Twitter, I’m not declaring that I know 100% Cora’s full context here. Based on our conversation she’s an intelligent individual, so I don’t want to front load context here but…

Division has primarily been built up by private developers. There has been some public money funneled into repaving the street, sewer, street clean up, fixing bus stops and other amenities. Just like Lents got, to the tune of about $96 million dollars per Willamette Week’s article Razed & Confused. Now that $96 million was primarily public money, which is nowhere near what is being spent on Division. However the private money, if Lents was deemed worth investing in and the red tape wasn’t too thick, would gladly follow to the area. In many ways, it is very possible that it does, however…

Lents still has zoning issues and related concerns that Cora points out. But it all points back to what I tweeted and attempted however poorly to explain (again, I blame the inability forming cohesive thoughts on the weakness of twitter and the annoyance of conversing with 104 characters per statement). I had stated that the private money, which is the primary force developing the Division Street retail, residential and other establishments right now is not something that isn’t available to Lents. If there is an area worth investing then private money will become available, it’s how the American economic system of banking and capital investment works for the private sector.

It seems there is a notion that the city, which the city leaders are somewhat mistaken in this regard too, can somehow direct private funds to specific jobs to city build or town center build. These however are things that are built not by some far removed city core, but by the community of neighbors that live around that particular town center. Not by the metropolitan core which is embodied in Metro. So…

The city of Portland, through Trimet, Metro and other entities can’t whimsically turn a designated area into the next Hawthorne District of help Lents magically recover after the Federal Government and Portland wrecked the city when they shoved I-205 directly on top of the town and annexed it (re: Lent History). Especially when the zoning has been left all out of whack, car focused and otherwise broken to actually rebuild a town and respective modern town center in the area. People that live in Lents however should comment on the 2030 Comprehensive Plan thoroughly to provide as much planning detail on the problems they see and on how to fix them as they possibly can at the http://www.portlandmaps.com/bps/cpmapp2/!

The Division Street build out has likely displaced many people because of rising rents. However the development that has gone on there has in no way been removed from development money that went into Lents. Lents simply needs zoning fixes and has a fight before it to truly redevelop well in the face of current issues.

To learn more about Lents and dive into this battle and help the area become a great neighborhood (not that it isn’t) that is based on a great town center ideal that provide people greater livability, check out these resources:

Action Item: Now I’m hellbent in getting up to speed on the Lents area, I’ve still got a bit to read.