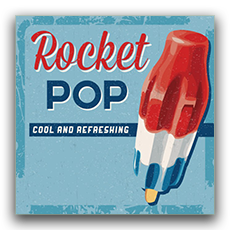 On April 7th I picked up an All-City Macho Man bike. Since I always name my bikes, Surlac was the name of my Surly Cross Check that got stolen on April 3rd. Per the Facebook conversation here my buddy Brett suggested a name that I’m going to go with, thus, this new bike is officially dubbed Rocket Pop!

Additionally I pulled the trigger on an All-City Space Horse Disc! More on this bike and Rocket Pop in the coming days along with the story of April 11th when the nice fella in a Jeep Cherokee drove into me and my bike! Weeehoo! Stay tuned.

I took a stroll over to Back Alley Bike Repair. It’s a cool bike repair shop located in Pioneer Square area in one of the back alleys. Super cool place, with some rad guys that run the shop. I knew they do custom builds after seeing a friend’s wicked awesome ride.

I walked in and talked to Julien and Ben about getting a build done on a Surly Long Haul Trucker. However Julien noticed some issues with the measurements of the Trucker compared to my previous bike that might just not work out. We discussed and looked at some other frames. The Ogre might have worked, and a few others but most ended up with a slanted top tube instead of a straight top tub, which I preferred. Also it wasn’t clear if the wheels would be set correctly to my riding position or if I’d feel like I was riding out of alignment all the time. So we kept looking.

After looking through a number of options we took a look at the All-City Space Horse Disc build as a base to start with. After reviewing what the build starts with, noticing it includes a number of components I’d want, I decided to pull the trigger on this ride! To start with, here’s the basic bike. I’ll have more on this bike real soon.

April 3rd, 2017 my bike, a modified, custom component, solid machine I’ve had for six years was stolen while I ate a po-boy in the International District in Seattle. I was immediately heartbroken that what I’d spent so much time, effort, and planning into had been whimsically stolen from me by some piece of shit scum human being. But these things happen. The police are unfortunately ineffective in fighting bike theft, and plans and organizations exist to fight this scourge, but alas the chances of recovery are so small it is simply best to immediately go through the stages of of grief: shock & denial, pain & guilt, anger & bargaining, depression & reflection, the upward turn, reconstruction, and acceptance as quickly as possible.

Simply, mourn and move on. There are trails to ride, adventures to have, and bike riding to do.

April 4th, 2017 begins and the obvious thing to do, which I’m privileged to be fortunate enough to do, is to simply get started on plans for a new bike. The list of things I want aren’t really difficult to have, but they are specific.

With that a list comes to mind of must haves:

But then the N+1 problem begins. do I really need drop bars, how much carrying do I need when I’m just commuting to work? Obviously I want 2-4 panniers for grocery getting, but I don’t need all that when it’s just the urban attack of commuting. Maybe I can just get some bullhorns or pursuit bars without the excess weight of panniers and related collateral weighing me down? Right? So maybe I should build two bikes?

Then it occurs to me, maybe that’s exactly what I ought to do. Ugh, I’ve got things to do and am not sure I want to blow that kind of money. I’ll have to think about it. That thought is going on the back burner, what do I need right now for the daily grind of commuting, grocery getting, and just living life day to day? That brings me back around to the list above. This needs collected and assembled as soon as possible. This is what I’ll do and updates will be forthcoming, until then, hold the ones you love close and watch out for those bike thieves.