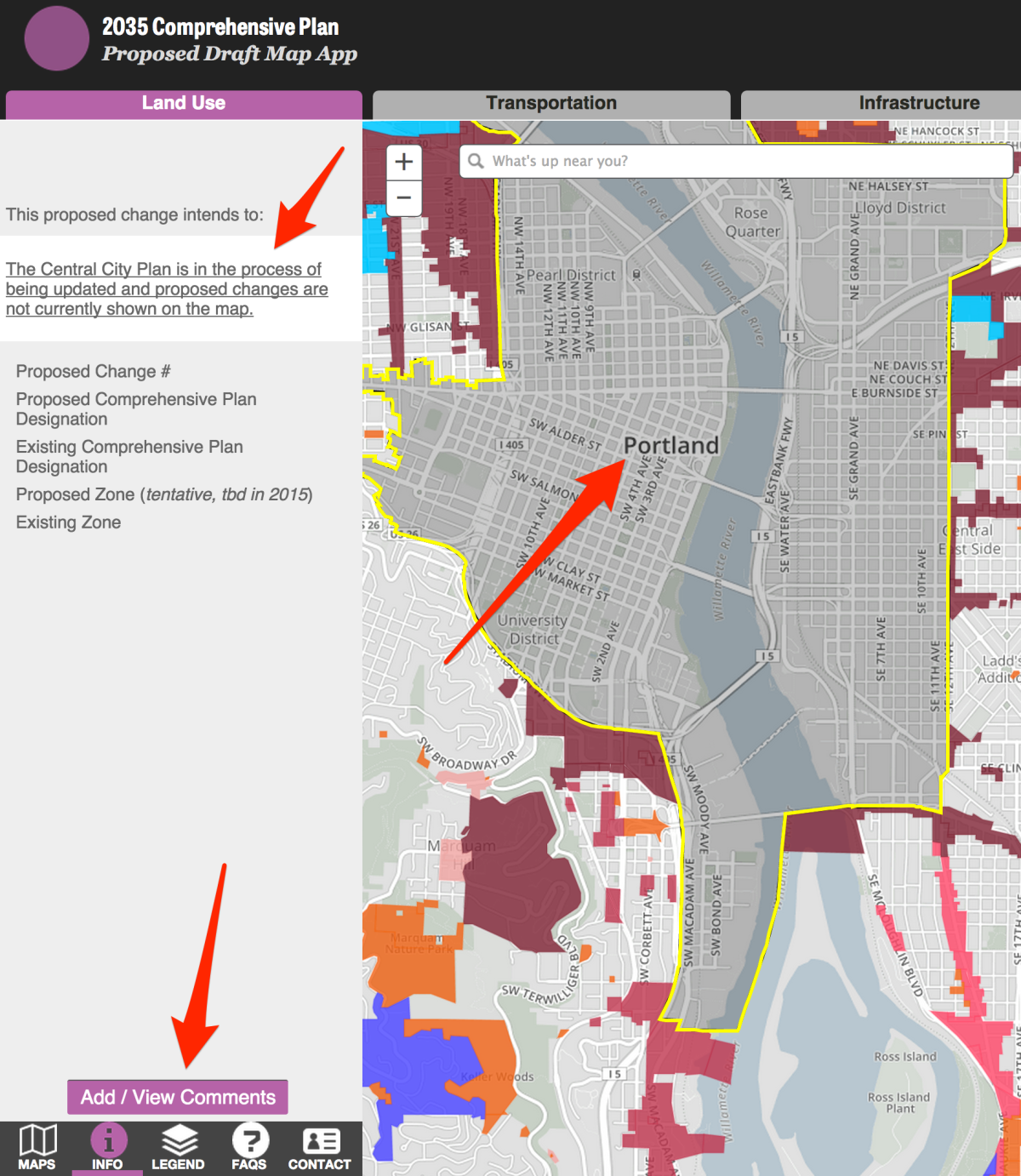 The 2035 Comprehensive Plan is currently being commented on for the city of Portland. The idea is to go to the plan site located at http://www.portlandmaps.com/bps/cpmapp2/. The main page when you arrive will look something like this…

Click on “View the Map” and the map will then render. Zoom in to the area you’d like to leave comments, such as your neighborhood. You’ll see color coded spaces within the various areas of town that are up for rezoning and new possibilities. This is where we, the citizens come into play to give input and help provide direction to our city.

Click on any of the areas that are colored that you’d like to leave a comment. In this example I clicked on the central city. Which to note, is part of a different plan that is being setup in a different way, so no comments to be left for this part of the map. Even though there is a View/Comment button toward the bottom left hand side of the view. So I suppose the system might let you actually click that and leave a comment, albeit they likely won’t matter for the central city at this time. So find a different part of the map to click on in your neighborhood.

Eventually, as I wrote previously in regards to where I’ll eventually be moving, is the outer south east along the PMLR. So I scrolled over in the map to leave comments.

When you find a place you want to comment, just select it and click on the Add / View Comments button.

After clicking Add / View Comments you’ll see any existing comments and a + button in the bottom right of the comment box.

The first section I commented on 21st & Clinton intersection area. This is the beginning area of an issue I’ve had with this neighborhood as of late. It is also one of the reasons I moved OUT of the Clinton & Division neighborhood area. I left the following comment.

“I recently lived on the Division Corridor and traveled on the Clinton Corridor. I would bike down the bike boulevard or take the #4. Over the last year it’s become extremely cumbersome to live in the area and I moved downtown to my current address. I’d however LIKE to move back into this area in the future, but the Clinton bike boulevard is now a through street (at least motorists behave like it is) while Division is limited access to cyclists (we’re not very welcome on the street, and it generally makes doing business in the area very frustrating for someone who prefers to use only transit or bicycle (out of choice, I make more than enough money to buy a car but I won’t). I also, years ago lived on 21st & Powell and moved form there because of the 21st Street being used as a north south between Division and Powell – people would speed through this area of town all the time, making it dangerous for children.

Summary: I’d really like to see a diverter, starting here preventing Division St traffic from turning here onto Clinton Street. I realize there needs to be a north south route but I’m not even a big fan of motorists tearing down the street here from Division to Powell (which they do regularly). So setting up some type of Diverter to control the routing of through traffic could turn this back into a respectable traffic flow and dramatically help the area in increasing its “town center” feel and function.”

…as I leave more comments, I’ll post them here for further comment by you dear readers. Feel free to add comments here (which we can discuss) but definitely go leave YOUR comments on the map. Be constructive, be helpful, and let’s help build Portland into an even more active, friendly, well built and awesome city!