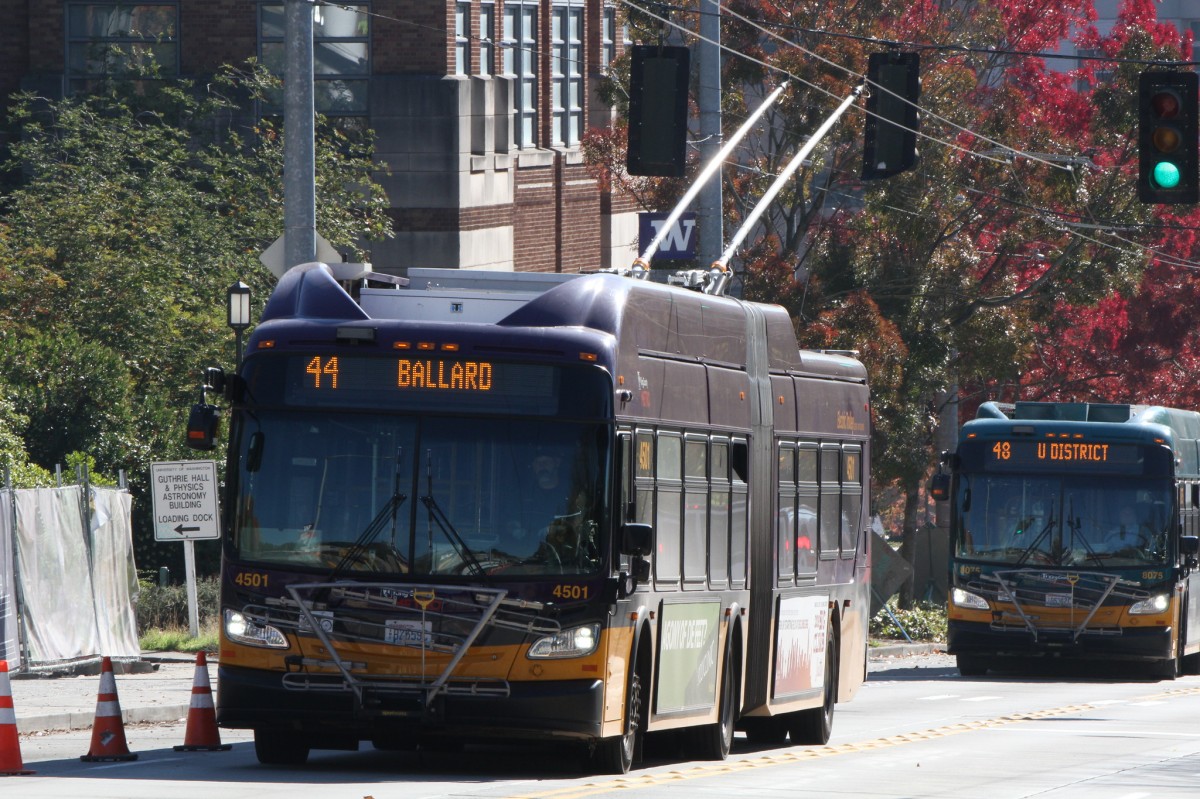 A few months ago I attended a conference out at SEATAC and haven’t, until now, managed to get a trip report written up. This is simply the story of my trips to and from the conference, with a little added context and information Transit Sleuth style.

Let’s talk about the strange town of SEATAC. First thing, SEATAC stands for Seattle-Tacoma, and is the combination zoned area between Seattle and Tacoma. This area is where some people in yesteryear decided there ought to be a shared international airport. In creating this airport they also decided to incorporate and turn it into a self-governed geographic region. Eventually this self-governed region with an airport became a self-governed town with an airport.

The conference for various reasons was being held in a space out at the airport, directly across the street from Airport Way. This made it an obvious transit trip that would involve the light rail. The only question for me was would I connect at University District or in downtown Seattle at Westlake. I could take either the KC Metro 44 Bus from Ballard to University District or KC Metro 40 to connect downtown at the Westlake stop.

I opted for a trip to University District to start the two part trip for a simple reason. There would be numerous places that would be open early to get some coffee and food at.

I departed downtown old Ballard at about 5:25am on the 44. The Starbucks stood open at this hour in Ballard but the Ballard Coffee Works was not open. There were a few people milling about at Starbucks and a few getting on the buses coming through, but not anywhere near the number that would be in the area in about one more hour.

I boarded and we made good time, with few people boarding between Ballard and Wallingford. I write a few, but by many US standards there was a lot boarding, numbering over 25 between the two town centers. As we made our way through Wallingford however, in just those several stops, another 30 people or so boarded.

Once me made the turn in the central city area of University District I got off and walked the block over to Cafe on the Ave. It’s a coffee shop that makes a decent breakfast and other items, plus has a pretty chill environment in which to eat. At this hour, now right around 5:50am, there were only 3 patrons in the cafe excluding me.

I ordered a cap, which came in sizes, again a coffee snob alert that clearly the definition of what a cappuccino is has eluded the establishment. But I digress, it’s pretty good espresso so no complaints! I ordered the 8oz size but inquired if I could just get a traditional standard cap size, which unfortunately they didn’t have available.

I sat and did some banging on the keyboard while waiting for breakfast. In short order, just a few minutes, my eggs, hash browns, ham, and English muffin arrived along with the “8oz” fake cappuccino. The plate was the standard American foray into a plat that was as big as my side torso with a splattering of food everywhere. Far more than one should reasonably eat, even if going out to work the fields or do hard labor. Thus, I ate about 35% of what was on the plate and was a happy camper.

Finished, I departed and found a Limebike, rented it and biked over to the University District light rail stop. On my way in, like a good sleuth, I made a number of happy little observations.

The beauty of the sunrise was on full display over the eastern horizon. Glimmering with an blinding brightness, impossible to view except looking askew of the rising fire orb. To the left or right however the run of light along the Earth’s surface, scattered with buildings, trees, mountains, and water screamed a gorgeous expanse. The golden tips of trees and the yellow and orange interlaced among all this was striking.

Back to the Trip

As I rolled through the southeastern intersection of walkways, a couple sat embraced as the sun rose, looking southeast toward Mount Rainier. Smiling and looking in each others eyes, budding love giving off a clear aura around those cutesies.

I rolled on as the Limebike battery started to sputter as I rolled onto the pedestrian overpass that connects to the University District station. I made it before it became a brick, locked the bike, confirmed it since sometimes the Libebike locks flake. Then I stood among the group of fellow transit riders to take the elevator to subsurface levels.

I watched the surface disappear from the elevator windows as we went down. A few seconds later the platform came into view and two LRT Vehicles stood ready for passengers. I checked which departure was in queue next and boarded the train. This departure, at 7:25am was boarded to approximately 35% capacity already (that’s about 60% of seats taken, considering a large % of capacity is standing room).

I’ve noted more than a few times, that something about LINK LRT is dramatically rougher in ride quality than Trimet’s MAX LRT. The thing that seems to come up as the issue is the tracks are laid funky. The few sections on MAX that had this ride quality issue in the past were replaced and haven’t had the issue since.

This issue I speak of specifically, is when the flanged wheels of the LRT vehicle hunt for the center position. This causes a jarring back and forth of the vehicle as it travels forward, and thus a somewhat rough ride. It also seems compounded, that maybe these vehicles are lighter and bouncier, suspension is bouncier, or something is causing these vehicles to hunt back and forth like this versus some of the comparative light rail around the United States.

One thing that might make this even more evident is the fact that a lot of the tracks are on raised right of way and when a vehicle is hunting between each flange at 50 or 60 feet, or higher, up in the air it’s a bit unsettling.

Last observation for this run, was the peculiar nature of the path the light rail runs out of downtown through Beacon Hill, heading east, then southeast along various neighborhoods in the street but then raises up again heading west across the interstate and rail lines. As this turn to head back south again is made one can face north and see the city in the distance and Boeing Field in the foreground. It makes it very clear that the most direct and efficient route to the airport was not the route chosen. Another one of those odd US traditions of disabling transit by purposely choosing inefficient routes so it would theoretically connect to points where people are located. It’s always seemed like one of the most inefficient methods of transit planning and operation.

…the day continued… but I just went and posted this without completion of post. Maybe I’ll be able to wrap this one up one day.