Today on the way home I rode my bike down to the Tilikum and across to the eastern shore of the river. There I boarded the Orange Line MAX north. The next MAX pulled into the station shortly after my arrival and I racked my bike. I threw the lock on it since I planned to sit on the raised floor section away from my bike.

Once up on the raised floor section I sat down and pulled the laptop out to get some work done while riding. Tons of people boarded at the PSU stop and each subsequent stop, it was after 16:00 so a lot of people were heading home.

As the train approached Burnside and began to cross the driver rang the bell rapidly and started to apply brakes a bit harder than one might expect. However the driver let up quickly and a guy stood on the north street corner of Burnside with a defeated look.

I wasn’t sure what, but he was looking at the MAX intently as we continued onward past where he was standing. We missed our light into the Davis Street Station Stop so we stopped just short at Couch Street. There this same individual came quickly up to the side of the MAX and looked undernearth. He looked relieved but unsure.

The driver popped the side window and asked, “Can you safely get it?” He confirmed with a nod of his head and a verbal yes at the same time. The driver then said, “go ahead and get it.” The guy leaned down in front of the MAX.

To the side I could look over and see where he was leaning down in from the MAX. He was definitely in a position that if the MAX lurched forward he’d easily be caught, crushed, and killed. It would easily be a very painful way to die. But the driver of course held the train steady. In the mirror I could see him working something out from under the train.

Then he stood up and I saw what he had retrieved. His skateboard had slid out from under his feet and managed to land under the MAX as it had passed by on Burnside. So here he was, relieved, that it had stayed entirely intact, and just been pushed along by the lower bar in front of the wheels of the MAX.

This last week has been a whole host of madness. I’ve tried to kick off the new year with some solid riding, which I’ve been partly successful at. I’ve also started my planning around activism and advocacy for cycling and transit in Portland. There are a number of projects, but the top three I’m aiming to put effort into are as follows:

No bets yet, I hope I’m successful at all three, but I’ll be happy if I can knock out #1 and one of the other two.

I’m also intending to actually meet, face-to-face, a number of individuals that I’ve been aiming to meet for years in the Portland area. Hopefully if I don’t accomplish the later two of my goals above, I can help others knock out a few of their goals for the coming year in activism and advocacy.

For now, cheers, happy new year, and all that jazz.

I’m sitting here digging through videos on YouTube and here’s this video Al took a while back. I’m not entirely sure who did the edits, but I have a few minor contention points. Here’s the video first:

Is the MAX dangerous based on un-correlated and non-causal crime?

Minute:Second 2:28 – 2:50 – I’m seriously not even going to respond to this insertion of media alarmism and FUD in the middle of this clip. That is a seriously disingenuous association, it is dishonest to even associate that with failure or success in any way. Pulling in outlier data, and pushing and implication that the MAX is a crime train or something of that nature is just extremely cheap and petty. So it’s not even getting an answer from me… just bring data next time and stop being disingenuous. I can argue this but it’s just ridiculous that this is even inserted in there, it’s at best a distraction to simpletons that will then immediately say something ignorant like, “see, it’s a failure there’s some stabbing…”

Minute:Second 2:57 – There’s a flash of some stats from an unspecified time that are supposedly Trimet’s ridership numbers. I’d stated that Trimet ridership on the MAX was 100k or more per day, which was a conservative estimate on my behalf. The data that was shown however was not accurate. Check out the actual PDF of performance information from Trimet itself. Now scroll down to the ridership data for April of 2014 which is the post time of this video (and relatively close +1 a month or so when Al and I actually met and had this conversation). The data for April 2014 is shown below:

As you can see, I was being extremely generous in saying the MAX carries merely 100k passenger trips a day, when in reality it registered over 121k that month.

Answer: Yes, I was correct in stating that the ridership is at least that much. It’s the opposite of hyperbole, it’s a conservative estimate, which makes the implication I was making absolutely true.

Is bus ridership barely 3 times what MAX ridership is even with 50 or so bus lines as I said in the video?

The ridership for Trimet bus lines, all of them (not including the paratransit, which is only 21k trips) comes in for the month of April at 335,030 passenger trips. That’s some pretty good ridership.

but if we do some math, if Trimet MAX’s ridership is 121k, and we multiply that by x3, we get 363k, clearly more than the 335k trips that were registered.

Answer: Yes, again, my statement was a simple conservative statement that again proves the point that the MAX, by line count, carries dramatically more people than the entire bus system put together. I made no other correlations than that, so no I’m not saying one could exist without the other, or any such thing. I merely stated one point.

So are there only 50 bus lines in Trimet’s System?

Well I did a little manual count (maybe I’m off by +-1?) but I got 80 bus lines on Trimet’s page here. Feel free to count. But agian, a conservative guess at the number of bus lines (and yeah, I should know the number of bus lines by now, but I only knew a very rough low balled amount). This makes the point even more direct to the point I’m making, in that the bus system has 80 bus lines and ONLY carries 3x as much as the MAX.

Answer: Yes, there are at LEAST 50 bus lines, after counting them there are 80.

So is MAX a failure by this measure? Is it truly ridiculous?

The MAX, based on this number of lines, carrying 25% of the passenger trips but only making up 1/20th of the actual lines is by no measure a failure. Looking at that same data for April we can even find more evidence that the MAX lines are doing fine, with a cost per passenger trip at $2.02 while the bus is at $3.27.

Answer: MAX is in no discernable way a failure based on metrics of subsidies and rates of usage for buses. One could make strong arguments that it even does even better against other Trimet modes too (re: Streetcar, WES).

Is MAX Blue Line the only successful line?

Minute:Second 3:26 – Is the Blue Line the only successful line? Study the data more. None of the MAX lines are operationally expensive compared to any bus lines. Even the most efficient bus lines (like the 72, 9, 4, 14, etc) do only slightly better than the Yellow Line and sometimes better than the Green or Red Lines. Most of the time they’re all extremely efficient in cost per passenger trip.

Answer: No, they’re all successful by the metrics available, even the dramatically lower ridership Yellow Line.

Is the Skytrain the only unquestionably successful transit in North America?

Answer: Yes, go look it up, I’m not digging that up for you. But it turns an actually net operational profit, which means that it makes more money from fares during operations than it takes to actually run the trains. That money, is then in turn used to subsidize the less efficient bus service throughout the city that costs more to run per passenger trip.

…then during 4:20- some time Al wants to now say that none of this matter that transit is a human right or something, but when we compare things we have to have a metric. Nobody said anything about what transit modern purpose is, we’re comparing what is success or failure, and actual metrics.

Green Line stole ridership, is it between 22-28k per day?

Answer 1: Yup, the ridership is at the levels I stated.

Answer 2: It did not steal ridership from the bus routes. Every route that the Green Line crosses that travels east and west (this include sthe #4, 9, 14, 15, and a number of other buses) all have seen ridership increases during the time since the Green Line opened. The #72, which runs parallel and crosses under the Green Line has also seen its ridership maintained or increased over that same period, month-to-month and by any other metric. The data is available, to get some of the specifics you will have to get a FOIA for Trimet to dig it up, but the data is there, just from the totals that are provided on the site (just look at the link above and check out the ridership for bus/MAX) and you’ll see that overall the ridership has generally seen an upward trend since the Green Line opened in 2009 versus a downward trend.

Here’s some of the suggestions that are in the lead to actually be implemented. People have pushed for more weekend service on the 19 route, they want the 31 and 33 to create one new line that will increase service and frequency on Harrison Street and King Road, which would then serve to connect Clackamas Town Center. You too can weigh in easily by going to the http://trimet.org/alerts/pmlrbuschanges/index.htm page and just click any of the “Weigh In” bubbles to the right of each route description and an email with a pre-populated subject line will appear. Add your comment (and likely your name, address and where you do or plan to live in that area and how it would affect or effect your daily travel).

END_OF_DOCUMENT_TOKEN_TO_BE_REPLACED 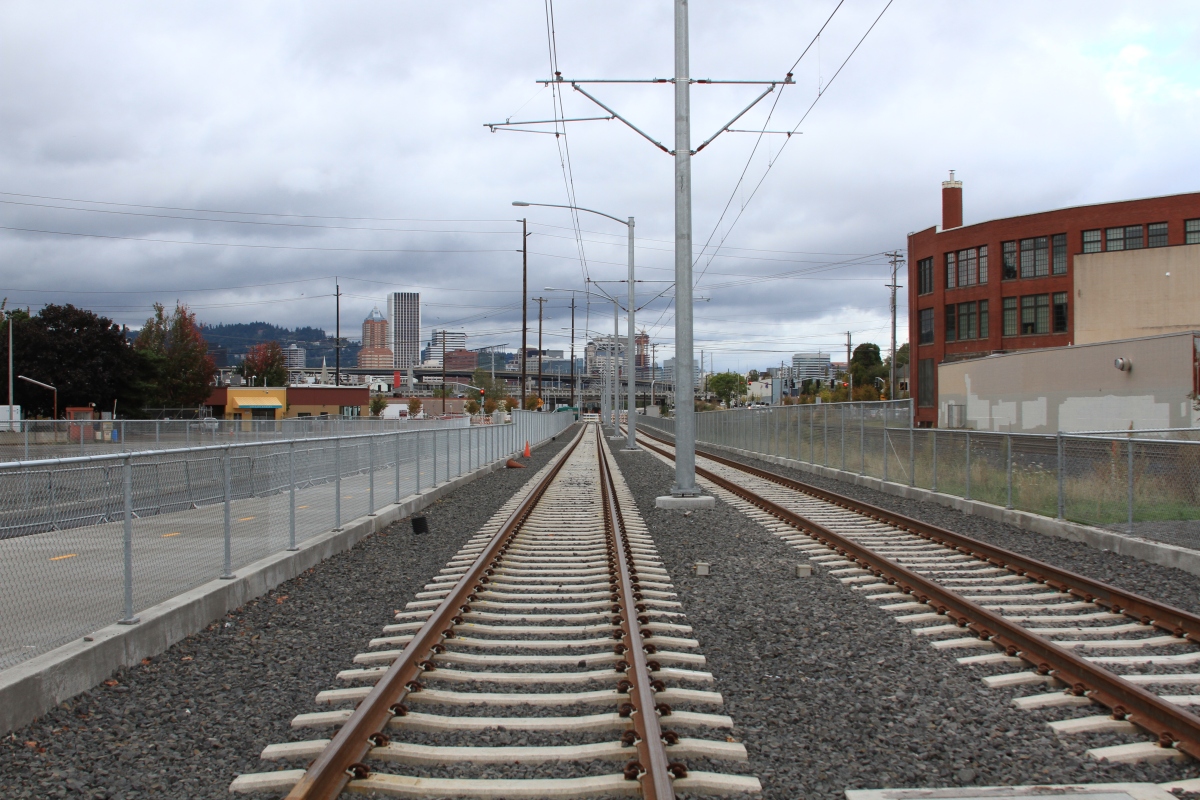 Crossing the Hawthorne on the #4 looking south toward the Marquam, Tilikum, and Ross Island Bridges. (click the image for full size image, or the respective bridge names for their Wikipedia entry)

I left about 11:30am today to get some lunch and take care of some coding, video taking, and some exploration. I’d been meaning to get into Milwaukie to check out how the work has been going on the Portland Milwaukie Light Rail (PMLR) line. I also wanted to snap some photos and video of the area. It turned out, I was in luck. I was able to get a lot of this done along with getting a few shots and commentary put together for numerous different parts of the Portland Milwaukie Light Rail line.

So here are a few of my discoveries…